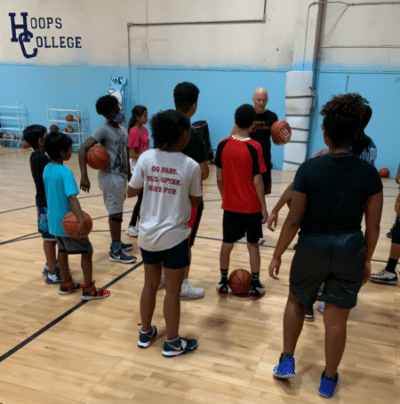 Become a member of the Hustle Crew

“Coming to Hoops College was and still is one of the best life decisions I’ve ever made. I’ve gotten so much better and continue to grow. 100% recommend it :)”

Occasionally we have “Game Day” for the younger kids. These sessions are filled with competitive drills that emphasize basic fundamentals but still let them compete. On this day, her team was winning. Then her team was losing. She thought Game Day was over. But then, there was one more event. The only way for her team to win was to get everyone on the other team out, without anyone on their team being eliminated. She eliminated everyone else on the other team before anyone on her team was eliminated. That’s the look of a competitor who is trying to figure out how to win, not blaming anyone else, just determined to figure it out.

Guys like this don’t come around very often. It’s not the freakish athleticism, but the relentless attitude that he brings to everything he does. He possesses the drive and determination to learn from every situation and constantly improve his skills and abilities. He wants to win every rep of every workout. Because that’s what it takes to win the next game or the next season. His willingness to take personal responsibility for success or failure means that he controls the process and loves the constant pursuit of excellence in everything he does.

Group Training
1 on 1 Training
Vertimax
Shooting Machine
Are You Ready?