Working with kids of all ages has been an interesting learning experience when it comes to their growth and development with the game of basketball.  I’m still trying to figure out why kids should play recreational basketball.

Can anyone give me any reasons why?

I can give you a bunch of reasons why they shouldn’t.

The one year we coached recreational basketball, every “practice” was a skill development session.  We even had kids from other teams “practice” with us.  Why?  Because why not?  There are no secrets.  It’s youth basketball. It should be about teaching kids and helping them get better.

In a once a week practice for an hour, we’ve seen what players learn.  We’ve also seen players who say no to the rec league and continue to just work on their skills. They come out better than a player who was better than them and played rec ball.

It’s not the player’s fault.  It’s the fact that these “leagues” are such bad environments for players to learn and improve.  It doesn’t have to be that way.  But these leagues have to beg a dad or mom to coach.  Or they find a “trainer” who Is just trying to recruit players for his or her own “program.”

There is no true certification program for basketball coaches. Basketball is played by millions of people of all ages across the world, but that doesn’t mean that these “players” are willing or able to teach the game to the next generation.  What we see is the best players are getting better, but everyone else is getting worse.  America used to be the gold standard, but I think that’s changing.  If we don’t start holding coaches to higher standards, and teaching them how to actually teach the game, we’ll be playing catch up.

If kids can’t shoot 3s, or make skip passes, why should they play 5 on 5.  We don’t let our high school players shoot 3s unless they can shoot 60-70% from 15 ft and closer. Most younger kids can’t make 6 out of 10 layups much less anything else.  By the way, it’s ok.  They aren’t supposed to be able to do that yet.  But the idea that we’re going to play 5 on 5 basketball when there’s no penalty for just chasing the ball around is absurd.

I’ve seen too many rec games where players are allowed to double dribble, travel, foul and everything else.  We call that stuff with our youngest kids when they play 3 on 3.  Why?  Because it matters. They are playing basketball.  There are rules.  The rules don’t need to change just because they are younger.  They just have to be taught. They can learn and it makes a difference as they get older.

If your kid is the best kid. that’s great.  Put them in an environment where they are challenged. There’s nothing worse than a lack of self-awareness at a young age. It sets them up for failure later.  If your kid isn’t the best kid, they probably won’t have a very good experience.

Even in a college or pro game, how many shots or even touches do “role” players get?  This is even more skewed in youth basketball.  If your kid isn’t touching the ball or guarding the ball, playing rec ball is basically just exercising for them and a negative experience of what basketball is.  We call it “little kid cardio.”

I’m still looking for reasons kids should play recreational basketball.  Why can’t they just go outside and play?  The more we’re around kids and helping them get better, the more we don’t understand. 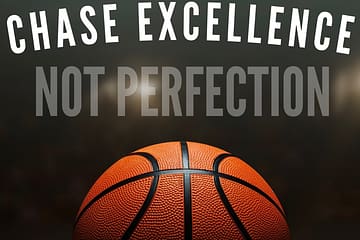 We think it’s critical to chase excellence, not perfection. I think perfectionism is something we as a society don’t understand very well. To me, perfectionism is a true double-edged sword. It gives high achievers the Read more…