Have you ever thought about keeping your post players stationary in your half court offense? What is the quote?  “Movement is the enemy of the defense.”  That quote is still true. However, in the case of post players, if the ball and your other players are moving, less movement may actually be better. Post play is more about positioning than it is movement.  A good post player knows how to get position whether it’s on the offensive or defensive end.  A good post player knows how to get position one or two passes ahead. The more post players move, the less they get position. Defensive post players are required to move with the ball whether the player they are defending moves or not.  Getting position and keeping position requires contact with the opponent.  Perimeter ball and player movement reduces the amount of contact that a post defender can have. A good offensive post player can take advantage of this defender’s movement.

Let’s think about how we teach a secondary break.  Many transition offenses have post players running to the rim.  Do we want them to go the ball side block if they can bury their defender under the rim?  Of course not.  If they post up at the rim, they catch the ball and shoot a lay-up.  If they post up on the block, they have to make a move to score.  This is all about gaining position based on how the defense plays. It has nothing to do with moving to a certain spot. Half court offense provides numerous examples of how we should emphasize positioning for our post players over movement. This thought process was inspired by observations playing in a 4 out 1 in alignment.  However, there are advantages to minimizing the movement of post players in a 3 out 2 in alignment as well. In a 4 out alignment, the post player can start anywhere you want them to. 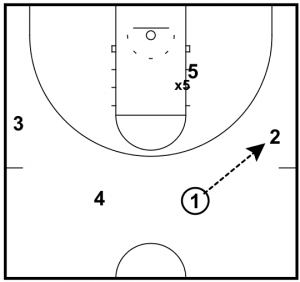 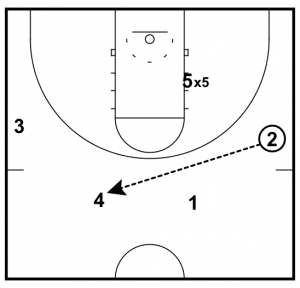 Let’s look at how ball movement and player movement create opportunities for a post player to impact the game without them having to move. If the post is on the ball side, he/she can be a primary receiver. In other words, they can be option number one for the next pass. They can also set a number of screens: ball screens, back screens, flex screens, and down screens.  They can occupy one or more help defenders. Of course, they are a
strong side rebounding option. They may be able to stand in one spot and execute many of these actions at one time. If the post is on the weak side, he/she can still be a receiver.  They can still post up.  They can flash to the ball.  They can set pin screens and they can still sprint to a ball screen. They can use screens set by other players for them. Moreover, it’s the best place to rebound.  Being on the weak side opens up the ball side block, which creates driving lanes.  It creates more challenging defensive rotations. Who helps?

So there are advantages to being on the ball side and on the weak side.  Having 4 perimeter players moving all over the court creates so much movement that it may be better to keep your post stationary. If your post is stationary, your guards always know where this player is.  They can cut and drive more freely because they know the post won’t be in the way.  They don’t have to wait for the post player to get position.  The post player should be gaining position ahead of time no matter where the ball is. This could be gaining position to receive a pass or get a rebound. A good defense will move when the ball moves. A good post player can take advantage of that movement without a lot of movement. If the ball is moving and a post is stationary, it is very difficult for one post defender to be in good defensive position all the the time. 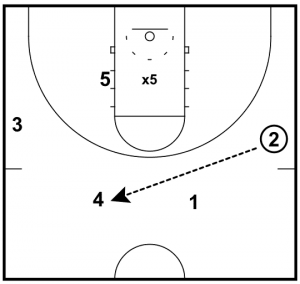 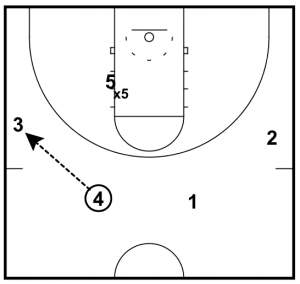 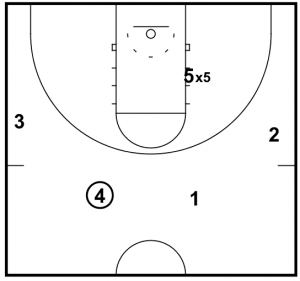 Teach your post players to take advantage of a defender’s initial position and use that position against them. If the offensive post player knows how to get and maintain position, they will always be able to make the defense uncomfortable and use it to their team’s advantage. If we teach them position first, before we teach them movement, they will have to move less to be successful because they are achieving better position within your offense. Here are two basic examples, but there are many more. The offensive post player might be denied on the first look.  However, if they can maintain position, they should be open on the second look.

This isn’t meant to encourage the perimeter players to stand still. This just shows how open a post can be even if the only thing that moves is the ball. When the offensive players start moving as well, it gives the post defender other things to worry about which can make it even easier on the offensive post to achieve an advantage and makes it harder on the other defensive players to help in the post. If the post is always on the ball side or always on the weak side, the defense may be able to adjust more easily. If your offense is moving the ball quickly, then you should be able to get your post player multiple opportunities within any possession just by teaching them to think one or two passes ahead instead of running all over the lane.