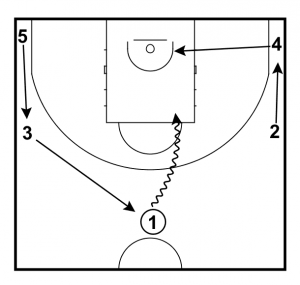 In the scenario to the left, 1 is driving to the right.  Player 2 is the most immediate player in the direction of the drive. We call that player the Natural Pitch player.  Player 3 is the player to the immediate left of player 1.  When player 3 rotates to the right, he/she will end up behind player 1.  We call this player the “safety”. 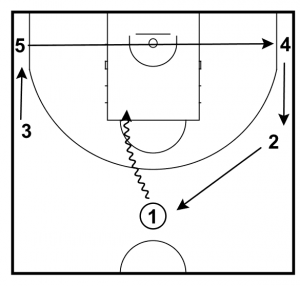 In the scenario to the right, 1 is driving to the left. Player 3 is the most immediate player in the direction of the drive. We call that player the Natural Pitch player. Player 2 is the player to the immediate right of player 1. When player 3 rotates to the left, he/she will end up behind player 1.

That’s pretty simple right?  Trust me that it will take time for players to learn and master the “Circle Movement” concept.

Who is it for?

Circle Movement at this point is only for perimeter players.  Posts can be taught to as well even though this is probably more than most teams want to tackle at this point. Remember, post players are considered players in or around the lane area.

Players will struggle in making this a habit. They will know what to do, but they won’t do it all the time. They may go through a series of steps in learning the action.

First, they may start by not moving or going the wrong way without the realization that they didn’t move correctly.  Then they will continue to do the same, but they will start catching themselves and try to correct but it will be too late. Next, they will react but it will likely be slow because they won’t want to be wrong..  They may even start to react incorrectly, but then catch themselves and rotate correctly.  Finally, they will start reacting correctly on a consistent basis.  It takes time and practice, but it will become a habit eventually.  Even then, it must be repeated to make the habit an instinct.

Teach them Circle Movement first so that as time passes by their confidence only grows as they learn other layers.  The alternative is to teach other things first and have initial confidence turn into frustration. In these situations, it may be difficult to get that confidence back.